in News and Press
0 Comments

A dazed and bloodied student who had just been mugged stumbled down a darkened alleyway in a slum. He lifted his shirt, revealing a gaping wound, before collapsing on the ground as curious onlookers gathered around.

Buzzing some 20 feet above the crowd of extras was a drone, its whirling blades humming like a swarm of bees. The aircraft carried a digital camera that captured the action for an upcoming episode of “Criminal Minds: Beyond Borders.”

The action is supposed to be occurring in Mumbai, India, but it’s being filmed at the Blue Cloud Ranch in Santa Clarita, a 95-acre facility with a variety of sets, scenery and equipment to make realistic-looking films and TV shows. 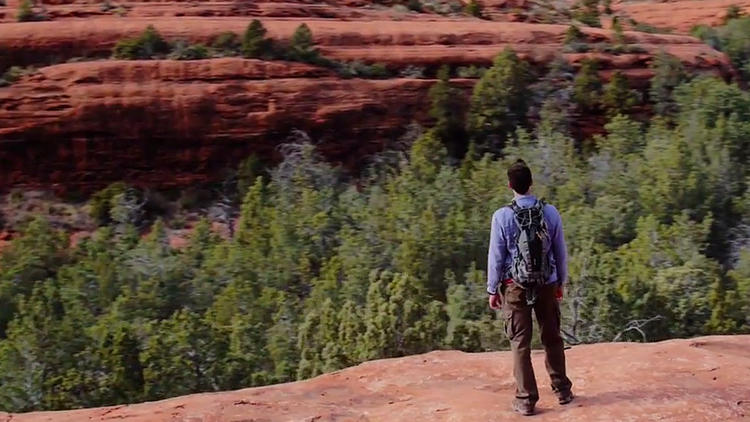 Aerial MOB 2014 demo reel for camerawork by a drone.

Increasingly, a new piece of gear is showing up on set: drones.

“We’re getting shots you wouldn’t get any other way,” said Tony Carmean, a co-founder of Aerial MOB, the San Diego company that supplied the drone for the “Criminal Minds” shoot.

A year after the Federal Aviation Administration cleared the way for their use by the film and television industry, unmanned aircraft systems are becoming popular tools for directors and cinematographers.

Drones aren’t yet ubiquitous — less than 10% of all productions use them. But demand is growing rapidly on film sets because they allow for more nimble filmmaking — and save money. A camera drone and crew costs as little as $5,000 a day, compared with at least $25,000 a day for a helicopter shoot. 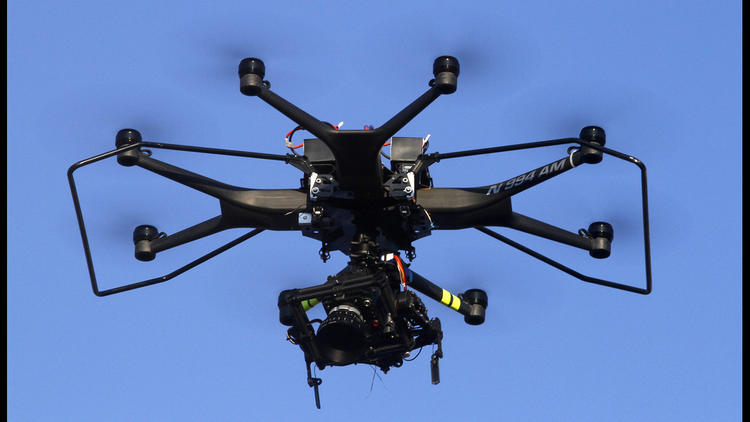 An Aerial MOB drone is used to shoot a scene on the set of “Criminal Minds: Beyond Borders” in Santa Clarita.

The city and the county of Los Angeles have issued nearly 60 permits for drones on film and TV sets in the last year, according to data from FilmL.A., the nonprofit group that handles permits for the L.A. region.

TV commercial directors have been especially quick to adopt the new technology, using drones to film commercials for such brands as Tesla, Chrysler and Nike. Drones also have been used on several TV shows, including HBO’s “The Leftovers” and CBS’ “Supergirl.” A spot for Audi even features drones on screen, with the flying machines besieging workers in the company parking lot.

Robbie Friedmann, a location manager and production supervisor, recently used a drone to provide an “over-the-shoulder” view of a man running through rugged desert terrain in Texas for the Discovery Channel show “Dual Survival.”

“It was unbelievable footage,” he said. “It was something you would only be able to do with a helicopter, but those costs are really prohibitive.” 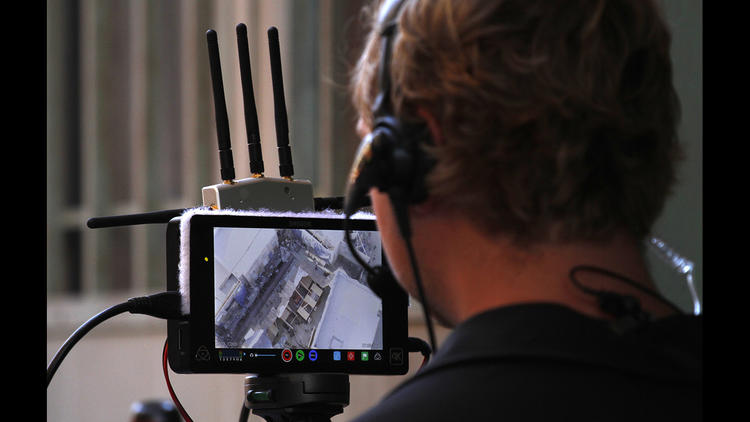 Austin Harris, a camera operator for Aerial MOB, watches a monitor during shooting of a scene for “Criminal Minds: Beyond Borders” in Santa Clarita.

The growing use of drones is changing the way that movies and TV shows are made, giving consumers a new perspective on the action.

Film industry experts say they could open up new possibilities of filmmaking in much the same way that lightweight cameras did in the 1960s with movies such as “Easy Rider” and the Steadicam did in 1970s. That camera-stabilizing system, with its distinctive arm, was famously used in the climbing-the-stairs scene in “Rocky.”

“Drones are like a Steadicam that can operate 200 feet up in the air,” said Michael Chambliss, a business representative for the International Cinematographers Guild. “It’s an entirely new vernacular in the language of filmmaking. All of a sudden we can do shots that we couldn’t do before.”

Chambliss, himself a veteran cinematographer, has been working to educate his members and major studios about the new technology that was initially greeted with some caution.

Until recently, the FAA allowed only public agencies such as fire departments to use drones for such things as tracking wildfires.

The agency effectively banned their use for commercial purposes because they were viewed as potential aviation safety hazards and threats to national security.

Prodded by the Motion Picture Assn. of America, the FAA took the first step toward allowing Hollywood to use drones when it granted a waiver requested last year by seven aerial photography companies, including Aerial MOB and Vortex Aerial of Corona.

Drone proponents hailed the decision, saying it would put the U.S. on a more even footing with other countries where they are legal and used on films such as the James Bond movie “Skyfall” and “Transformers: Age of Extinction.”

Until recently, many California drone operators did much of their work in South America, Europe and Canada.

Filmmakers contend that drones create more distinctive shots because they can go where manned aircraft can’t — dropping down into narrow spaces such as alleyways and canyons and even flying through doors and windows.

“Everybody is trying to develop a shot for them,” said Bob Harvey, executive vice president of sales and marketing for Panavision, which makes and rents cameras and lenses and has referred business to Aerial MOB. “They are certainly going to give more flexibility to artists.” 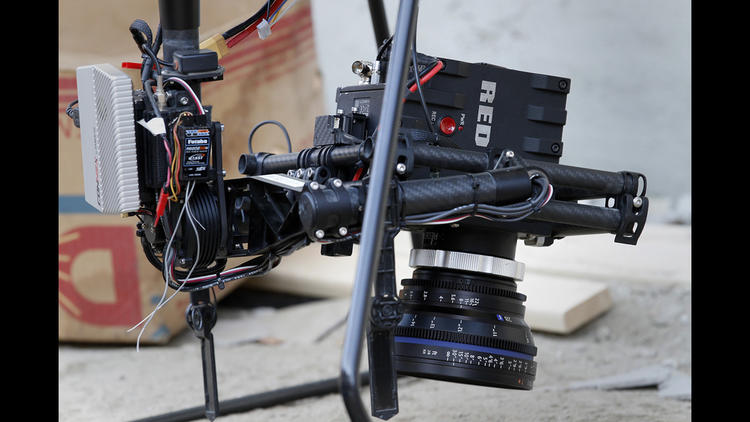 A RED Epic camera carried by a drone is used to film a scene of “Criminal Minds: Beyond Borders” in Santa Clarita. The Aerial MOB drone can carry up to a 22-pound cinema camera and travel up to 40 mph.

Ian Woolf, a co-producer and unit production manager for “Criminal Minds: Beyond Borders,” said the low-flying drone shot on the Santa Clarita shoot wouldn’t have been possible with a helicopter and was 10% of the cost. It took only two hours to set up the shot and 10 minutes to film the scene.

“It’s easier, faster, quicker and safer,” said Woolf, who also used drones to film a scene at a ranch in Simi Valley standing in for Morocco. “From my perspective as a unit production manager, it’s amazing.”

“When you’re flying a helicopter you have a human being on board,” Chambliss said. “If something goes wrong you can almost guarantee people will get hurt or killed, whereas with a drone, all you need is a broom and a garbage bag. It’s a much smaller impact.”

Of course, drones can still be dangerous.

There have been a rash of incidents, mostly involving drones operated by hobbyists. A Pasadena infant was injured in September when an operator lost control of his drone.

In another incident, a 57-year-old man was charged in Los Angeles with obstructing a police officer when he flew a drone near a police helicopter.

In 2014, TGI Friday’s mistletoe drone promotion went awry when a drone filming in a Brooklyn restaurant struck a photographer, cutting her nose and chin.

The cinematographers union, which has members employed by 16 drone companies, has been working with other industry groups to develop a set of safety guidelines for use of drones.

His company, for example, used drones to film scenes in Netflix’s “Narcos” series, but concluded that helicopters were more effective when they were hired for filming the fast-paced action in the upcoming “Point Break” movie.

“I really believe for the large action work, and moving quickly and covering ground, the helicopter is best,” he said. “It’s about

using the best tool for the job.”

Under the new FAA rules, drones can be used only on sets that are closed to the public and cannot be operated at night. 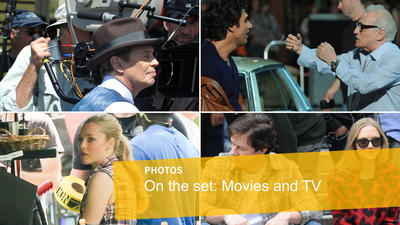 A behind-the-scenes look at filming around the world for television and movies as seen from the streets.

Operators must hold a recreational or sports pilot certificate, keep the drones within their line of sight and below an altitude of 400 feet.

At least two people are required to operate the drones: one to pilot the craft with a controller and a second who operates the camera and acts as spotter to watch the drone in flight.

Applications for drone waivers have flooded the FAA, which has authorized more than 200 companies and individuals to operate drones for film production, according to the agency’s website.

One of its first high-profile customers was Warner Bros., which hired Aerial MOB in December to film a scene of a man running through the woods for an episode of “The Mentalist.”

Since then, business has boomed. The company handles about a dozen aerial shoots a month, with business expected to exceed

“I’m getting calls left and right,” he said.